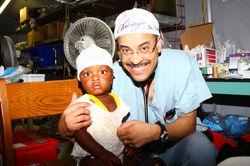 Dr. Richardson received his undergraduate degree in Biology {B.S.} from Loyola University of Chicago. The degree conferred was the Honors Degree, the highest academic distinction conferred by the College of Arts and Sciences. He received his medical degree {M.D.} from Rush University Medical College. Over the course of his professional career Dr. Richardson has held a number of academic appointments including Chair of the subcommittee on governance and administration at Rush University, Assistant Dean of Minority Affairs at Rush Medical College, Assistant Professor of Family Medicine at Rush University Medical Center and Associate Attending Family Physician at Rush University Medical Center in Chicago, Illinois. Dr. Richardson has received the Degree of Fellow of the American Academy of Family Physicians.  The academic Degree of Fellow recognizes American Academy of Family Physician members who have distinguished themselves among their colleagues, as well as their communities, by their service to family medicine, by their advancement of healthcare to the American people and by their professional development through medical education and research. Fellows of the AAFP are recognized as Champions of Family Medicine. Dr. Richardson has been certified and recertified  by the American Board of Family Medicine as well as the National Board of Physicians and Surgeons as a Diplomat of Family Medicine. He received the faculty member Alpha Omega Alpha certification for excellence in medical education from the Rush University Chapter and has received numerous teaching awards including the coveted Phoenix Award from Rush Medical College for academic excellence in medical education. He has received the American Medical Association’s Physician Recognition Award . Dr. Richardson has sat on the editorial staff of the World Book Medical Encyclopedia as an Associate Medical Editor and has lectured nationally on various educational topics in the academic discipline of Family Medicine including anxiety and depression in primary care. He has taught with Dr. John Bradley in the Chicago Health and Medical Careers Program, CAHCMP, at IIT for the past 30 years using an innovative problem based curriculum to develop underrepresented minority students for careers in medicine and the health professions. Dr. Richardson was the Director of the Pre-Matriculation Program for underrepresented minority students at Rosalind Franklin University of Medicine and Science.

Dr. Richardson has taught on the national level co-lecturing with the former U.S. Surgeon General, Dr. David Satcher, on disparities in healthcare. Dr. Richardson has served as principal investigator on grants supported by Robert Wood Johnson Foundation and the Department of Health and Human Services. He has served as a guest surveyor for the Liaison Committee on Medical Education {LCME}. Dr. Richardson was featured in the American Academy of Family Physicians videotape "Family Practice...A Specialty for Our Time" designed for use in the American Academy of Family Physician's 50th Anniversary observance and also in the Public Broadcasting System special "The Family Doctor...At the Heart of Medicine" , one of four family physicians highlighted nationally.

National speaking engagements over the past 30 years include:

In addition to his academic and private clinical practice responsibilities, Dr. Richardson served as the Medical Director of Advocate Occupational Medicine Healthcare for ten years as a board certified medical review officer. He has served on the Advocate Disability Council system wide.

Dr. Richardson has been married for 35 years to Julie, our office manager. They have four beautiful children: Jessica, a 3rd year Attending physician in Family Medicine at the University of Illinois in Chicago, Fred III, a 2nd year Defense Attorney in Wisconsin,  Benjamin, a  PhD in Medicinal Chemistry from UIC Chicago and Angelica, a graduate of Bradley University in Theater and a Kennedy Center Award winner and Williamstown Theater Festival alumni member working in L.A. and Chicago as an actress. She is the recent recipient of the coveted Jeff Award for her work in "For Colored Girls considering Suicide when the Rainbow is Enuf".  Recently, we also welcomed our 5th grandchild into the world. As Julie says, they all are simply precious, all gifts from God!

Dr. Richardson completed a two week trip to Haiti as a physician volunteer in the medical relief effort in April 2010. He is planning a return visit soon.

Dr. Richardson has been chosen as the AOA, Alpha Omega Alpha, Outstanding Faculty Member in Medical Education for 2014 by the University of Illinois College of Medicine.

Dr. Richardson was featured in the Chicago Tribune and nationally on the Today Show with Bob Dotson in 2014-2015 for his work treating the underserved elderly in Chicago's toughest neighborhoods with home visits and educating future generations of underrepresented minority medical students for the past 25 years. He was recently featured on the Steve Harvey Show where he was honored as a Harvey's Hero for his work in the community and with minority medical education. He was a guest speaker for We Day Illinois 2015 giving a motivational speech to over 20,000 youth at the Allstate Arena on April 30, 2015.

Dr. Richardson was invited to speak at the Family Medicine Midwest Conference for the Illinois Academy of Family Physicians on October 11, 2015.

Dr. Richardson was invited to be the Keynote Speaker for the SNMA Regional Leadership Institute Conference in Chicago in 2015 and 2019 at Rosalind Franklin University of Medicine and Science. The topic was “Building a Pipeline: Giving back to the Community" and "Leadership in Minority Medical Education".

Dr. Richardson was interviewed by Chicago ABC 7's Heart & Soul for his work in the Chicago community taking care of home bound elderly by making house calls and his teaching of underrepresented minority students for careers in Medicine.